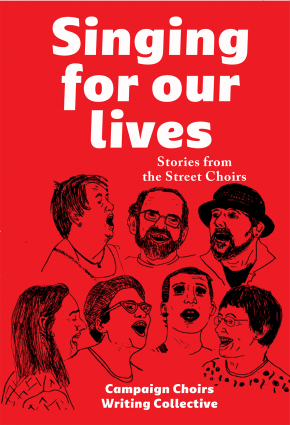 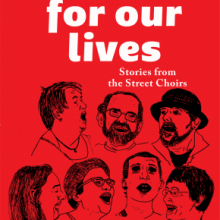 Singing for Our Lives

Tells stories from within street choirs in the UK, exploring their politics, music, the relationships that sustain them and the futures they imagine.

By The Campaign Choirs Writing Collective

Singing for Our Lives: Stories from the Street Choirs centres on more than 40 oral histories gathered from members of the UK’s many street choirs.

The title is taken from ‘Singing for Our Lives’, a song by Holly Near that is popular in the repertoire of many street choirs. Exploring the role of street choirs in political culture, Singing For Our Lives introduces this neglected world to a wider public, including activists and academics.

The book intends to inspire the reader to engage with this world: to find out more, to join a choir in their community, to enlist their local street choir to support campaigns for social change and, more generally, to mobilise artistic creativity in progressive social movements.

Singing for Our Lives is introduction to street choirs and their history, exploring origins in and connections with other social movements, for example the Workers Education Association, the Clarion movement, Big Flame and the Social Forum movement. The book identifies the political nodes where choir histories intersect, notably Greenham Common, the Miners’ Strike, anti-apartheid and Palestinian struggles.

Signing for Our Lives also elaborates the personal stories and experiences of people who participate in street choirs, and the unique social practices created within them. The book tells the important, if often overlooked story, of how making music can contribute to non-violent, just and sustainable social transitions.

About the authors: Campaign Choirs Writing Collective are Kelvin Mason, Jenny Patient and Lotte Reimer. Kelvin Mason is a writer with background in social movement activism and academia, particularly participatory action research (PAR). He is the author of three non-fiction books on participatory technology development and has published numerous research, feature and news articles. An environmental campaigner with Sheffield Climate Alliance, Jenny Patient is engaged in action research on the future of energy-intensive industries in Yorkshire and the Humber. Her background is in teaching, community development and project management, and she loves to sing in the streets and on actions. With a keen interest in promoting song as a political tool, Lotte Reimer is an activist and prime mover in the Campaign Choirs Network. She is a Natural Voice Practitioner, choir leader and member of the Natural Voice Network, NVN. Lotte compiles and edits the Wales section of Peace News. Campaign Choirs Writing Collective academic adviser and editor, Gavin Brown, is an academic geographer at the University of Leicester. He has researched a range of LGBTQ social movements and has recently written a book about young people’s involvement in anti-apartheid solidarity activism in London in the 1980s.

“I have supported this project from its early beginnings and CERTAINLY endorse this important account of the street choir movement.” Peggy Seeger

“Singing For Our Lives is a long overdue and engaging account of a lively but neglected form of political activism: street choirs. The authors, singers themselves, write from within the street choirs movement, drawing on in-depth interviews with more than forty members of eleven choirs. We see choirs emerging and flourishing in London, Birmingham, Sheffield, Nottingham and other cities up and down the country. We see them gathering in an annual Street Music Festival and organizing in a Campaign Choirs Network.

What sparks a street choir to life? A shared critique of injustice, inequality and oppression; a shared opposition to austerity policies, militarism and environmental destruction. What holds its singers together? An ethic of care, it seems, that fosters a sense of belonging among members. And what does the audience grasp from the sound of choirs out there in the arena of the street, busking, demonstrating, and performing at rallies? They glimpse a different mode of ‘doing politics’. A far cry from leaflets and speeches, the songs of political choirs in the streets are a unique expression of joy and rage, heart-warming and mobilizing.

Though produced in a responsible methodology of participatory action research, this book is no dry work of sociology. It speaks to us as political activists, bringing to our attention the street choir movement as a valuable space we may have overlooked, in which rousing and effective political work can be done, lifting spirits, energizing and unifying people of a locality and community. Writing, learning, and singing meaningful and inspiring songs with others can be revolutionary in itself. ‘We are making the road as we go’, to quote a song by London choir Raised Voices.

Publication of this book will surely help increase awareness of street choirs, attract new members to them, and secure a prosperous future for a creative political and cultural movement.”

“This is a gem of a book. If you’re not actually listening to – or singing with – the harmonious voices of these rebels, singing truth to power, then reading their testimonies of the highs, lows and disc(h)ordant moments of the street choir is surely the next best thing.”

David Harvie is associate professor of finance and political economy at University of Leicester. He sings with S¡ng Meanwood! and Commoners Choir, both Leeds-based.

“This book gives a unique opportunity to read about the growth of political choirs from as far back as the early 40s to their being a widespread phenomenon today. Alongside them have grown the non-auditioned community choirs and many of these have developed repertoires addressing issues of social justice in song, issues such as equality, diversity and internationalism along with women’s and LGBT rights. No wonder many of these choirs have joined the Street/Political Choir movement. After all we do refer to ‘people finding their voice’ so what better way than to make this metaphor sound out with power and beauty in song.”

“It seems that everywhere you look nowadays there’s a choir – they’re popping up all over the place, these ready-made communities that remind us how good we are at being creative, communally, without the help of digital technology. Our voices, that’s all, gathered in a way that teaches us to listen, share, learn, play and empathise. But what are we singing about? And with all the benefits of joining a choir, does that question really matter?

The answer, cleverly and exhaustively set out here, is a definite yes. It does matter what we sing. Choirs can be an incredible force for telling the stories of our times, the stories of the world around us. This analytical framework – I take that phrase directly from the book’s introduction – is a crucial element of many choirs, an element that gives a choir focus and purpose. This book rightly champions those choirs who take their singing out of those warm rehearsal rooms and onto the streets, who use songs as clarion calls, revitalising the role of the 17th century broadside balladeers who set up on street corners to sing the news.

This book, based on interviews with street choristers up and down the country, collects the arguments for these glorious gatherings of singers who aren’t afraid to put their ‘analytical framework’ to a catchy melody with added harmonies. Street choirs, campaigning choirs, choirs who recognise that singing together can be effective and vital in pushing towards a fairer, more just world. As one of the contributors to the book, Bernard Bourdillon, puts it: ‘Everything is a contribution to a big cause – the big cause is the sum of those small contributions…’”

Boff Whalley, Chumbawumba and founder of the Commoners Choir 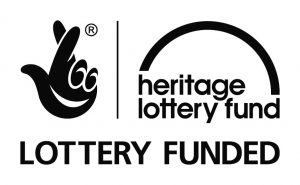