HammerOn titles are getting a fair bit of attention in academic journals and specialist press, and rightly so.

‘In this public [obesity] discourse the voices of people who would be identified as obese are rarely heard. Enter Charlotte Cooper, researcher, performer, and therapist who has devoted most of her adult life to fat activism. Her book is a personal account of the fat activist movement. Cooper defines fat activism as “cultural work”. She critiques ideas about body positivity and a “monolithic ideal of trite self love”, and calls out careerist researchers for “reproducing fat people as fascinating but passive specimens”’. 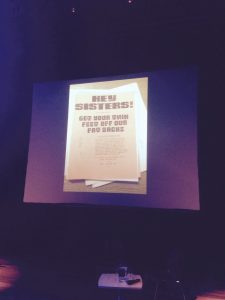 Glyde concludes that Cooper ‘guides the reader into a fertile place of growth a million miles from timebombs and epidemics, and gives a human face to a large segment of the population who are too often dehumanised.’

In another review, which appeared in Fat Studies: An Interdisciplinary Journal of Body Weight and Society, Elliot Director offered their appraisal of Charlotte’s book:

‘The interviews that Cooper has conducted make this text absolutely outstanding—and moreover, given the passing of some members of the fat activist movement she discusses since she interviewed them for the text, they make this crucial to any scholarship on the movement’s early history. Activists’ testimonials (both from interviews and archives) highlight key points in the history of the movement, such as the founding of the National Association to Aid Fat Americans (later renamed the National Association to Advance Fat Acceptance, or NAAFA), the splintering off of the radical fat feminist group the Fat Underground, and the spread of fat feminism in the United Kingdom with the London Fat Women’s Group in the mid-1980s—give previously unseen insights into a movement that she reveals to be more diverse, fractured, and vibrant than has been demonstrated in previous scholarship.’

Director reflects that the ‘central take-away from Cooper’s text…is [to] challenge…activists not only to find our own voices, but to use them in a way that does not silence others. Although this text at times stumbles, in the end it stands tall as a testament to the survival of a movement even in the face of widespread, sometimes vicious attempts to eradicate it. Charlotte Cooper’s Fat Activism: A Radical Social Movement may not be the final volume on fat history, but it is, without doubt, an essential one, and should be required reading for all generations of fat activists, both in the academy and beyond it.’

Shannon Woodcock’s Life is War: Surviving Dictatorship in Communist Albania has also been received well in Albania and Kosovo.

During her promotion of the book in Albania, The Tirana Times reported how ‘Shannon’s characters, her interviewees, join her in a book promotion in Tirana in a hot day. After the ceremonies they start to thank her about the opportunity to talk. It is interesting how people who have suffered have always an urge to talk and the rest an inclination to be scared of listening. We sit in the promotion all together: people who have lost their family members to the regime, people who have been forced to relocate or change their lives, people who are good at telling stories and younger people who are trying to comprehend. Just sitting together seems to help all of us.’

There is also a detailed interview with Shannon, conducted by Hana Marku, on Prishtina Insight.

Marku writes: ‘Life is War achieves the opposite of what the regime intended: keeping its violence hidden and its narrative unquestioned. The lives presented to the reader in the book were subjected to a system that aimed to not only destroy them but any trace of their memory as well…Woodcock’s intention with Life is War besides the documentation of pain and violence, is the stubborn beauty each of these lives contained.’

We’ll post more reviews and media coverage when we have them.

If you want to review a HammerOn title, or run an interview with our authors, do get in touch.