In the latest blog post written to celebrate the publication of her new book, Life is War: Surviving Dictatorship in Communist Albania, Shannon Woodcock discusses how Albania’s capital city, Tirana, has changed in the 20th and 21st centuries.

Be sure to check out details of Life is War events taking place late May/ early June in London, Tirana and Bristol.

In the first ten minutes on the ground in Albania I learnt that the mountain looming over Tirana had a name; Mt Dajti. A sense of dread assailed me. If Romanians and Austrians had loved to walk me and my seaside grown legs all over alpine ranges as anonymous land orms, what hiking horror awaited me in this place where mountains were known as individuals? 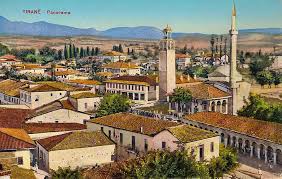 ‘How often do you climb up Mt Dajti?’ I asked Blendi, who had been sent to collect the Australian from the airport.

‘Walk up there? What for? You can take the cable car up and drink a coffee there if you want.’

Ecstatic with that response, I know Mt Dajti only from the city below.

Tirana, which has changed so fast since the 1990s, was little more than a small town when it was named the capital in 1919.

Even though it grew exponentially as the centre of the socialist regime between World War Two and 1991, population movement and location was entirely controlled by the Party. In post-socialist times, the state no longer controlled population movement or dictated where people could live. Unregulated private cars, building and capitalist trade were allowed for the first time and flourished. People from all over Albania moved to Tirana, and the lack of state regulation and infrastructure continues today, negatively affecting those with least economic and social power the most, especially Romani Albanian communities.

Children play between the towers until new blocks are built. Over and over, families with children and grandparents spill into the dusty spaces between concrete walls, competing with parked cars for the space to kick a ball. People, vegetable stalls, packs of dogs and sometimes horses and donkeys, share makeshift sidewalk space at the edge of the street. As no government has organised waste disposal yet, people carefully pile their rubbish throughout the city. Sometimes the garbage is set aflame, and sometimes it smoulders; plastic melts to lumps. The standard is to affect nonchalance when walking the roads, as if looking tough will convince drivers not to hit you. 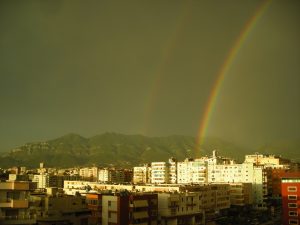 Dajti looms, she brings and holds the weather. Her gaze orients the chaotic city, you can see her from anywhere. The sun rises over her shoulder, clouds follow, snow falls, or she basks in the sun. Follow the line of her sight west, and you are facing the Ionian Sea, with Italy across the water. On a hot summer day the light is white, the sky a faded blue, the same light you know from the Greek islands to Albania’s south. All the mountains that have her back are shifting shadows. Sometimes a winding road or a curl of smoke makes you feel you could find your way there, then the sun moves on and it seems the land undulates, waving away the possibility of encroachment.

In winter, electrical storms circle over Tirana. Trapped between the sea and the mountains, pacing a tight circle, the rumbles and stomps of thunder are broken by sharp cracks of lightning. Sometimes the storms arrive suddenly in the afternoon and go all night. They head off over the mountains in the end, or work themselves into exhaustion and dissipate by the next morning. The aftermath requires full attention. Roads are washed away. People, dogs and car all have to negotiate a new geography of lakes and small rivers, pooling and rushing where they must, regardless of the concrete humans put in their way. 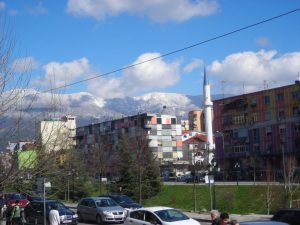 Every city in Albania, and each road between cities, has its mountains. They are part of everyone’s everyday stories. Vlach shepherds like Thoma walked the sheep from the southern mountains of Delvina to Mt Tomorr of Berat each spring, sleeping in the shelters called stans, huddled against the hills to protect them from the weather. When Majko was a teacher in the north-eastern mountains, he skied with the students to the top of the mountain in winter, while their parents waited for them to travel safely downhill and home through the forest, worried about the wolves that grew hungrier before the spring. People walked up steep mountain roads to visit their family members in political prisons, weighting their pockets with rocks against the wind. And now, people remember these moments as they travel freely between cities in minivans, the furgons.